What is a Language?

Every Language is defined by specifying four sets:

Different Types of Grammars and Languages

Type-0 grammars, also known as unrestricted grammars and recursively enumerable, contains all formal grammars. They generate all languages that can be represented and decided by a Turing machine. 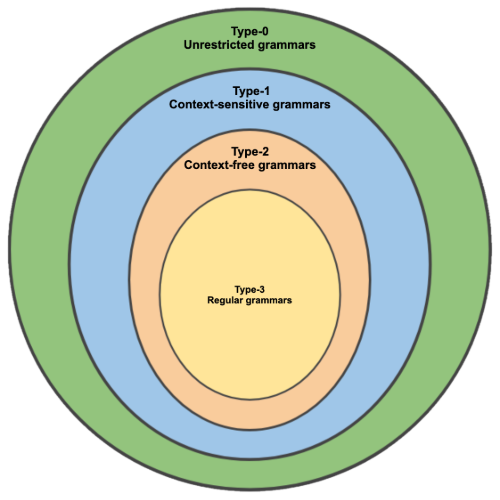 What is a Compiler?

The front-end of a compiler takes the source code as input and generates an intermediate representation for it. The front-end has four sub-modules: lexer (scanner), parser, semantic analyzer, and intermediate code generator. Hence, lexers are usually implemented using finite state machines.

The parser is the sub-module that understands the language grammar. The parser takes the stream of tokens and generates an abstract syntax tree. Abstract syntax tree is a data structure that has all sentences (expressions) of your program. The syntax of a language is usually defined using context-free grammars (type-2) and in BNF (Backus normal form).

The semantic analyzer is the sub-module that understands the language semantic. It traverses the AST (abstract syntax tree) and ensures sentences (expressions) are semantically valid using the type system. The output of this module is an intermediate representation which is the AST with additional metadata, properties, and resolved references using symbol table.

The middle-end of a compiler takes the raw intermediate representation and optimize it. The optimization is still independent of the target machine.

The back-end of a compiler takes the (optimized) intermediate representation and generates a machine-dependent code that can be executed. It has two sub-modules. The first sub-module generates machine code and the second sub-module optimize the generated machine code. The end result is an assembly code targeted and optimized for a specific architecture (386, amd64, arm, arm64, …).

In this section, we briefly review some of the widely-used tools available for building compilers.

Lex is a program for generating and creating lexers and scanners. Flex (fast lexical analyzer generator) is an alternative to Lex. Flex takes an input file that defines all valid tokens (words) of a language and generates a lexer in C/C++. You can find an example of using Flex here.

Yacc (Yet Another Compiler-Compiler) is a program for creating and generating LALR parsers (Look-Ahead LR parser). Bison is a version of Yacc. Yacc/Bison are used together with Lex/Flex. Bison reads a specification of a context-free language written in BNF and generates a parser in C/C++. You can find an example of using Bison here.

LLVM (The LLVM Compiler Infrastructure) is an open-source project providing a set of tools for building a front-end for any programming language and a back-end for any target instruction-set (architecture). LLVM is built around a machine-independent intermediate representation which is a portable high-level assembly language. You can find the examples and tutorials here.

Building A Compiler in Go

Now it is time for the fun part! We want to build a micro-compiler in Go.

Our language is a logical formula of labels with ANDs and ORs. For example, ((sport,soccer);(music,dance)) means we want all contents either related to sport and soccer or related to music and dance. Our compiler is going to create a SQL query for a given label formula. You can find the source code for this example here

Let’s first define our language. Our language has a very simple syntax for defining a logical formula of labels for querying different contents. For example (food,health) means that we want all products belonging to food and health categories. Or, (store-1;store-2) means that we are interested in all products that are available either in store 1 or store 2.

For defining a language, we need to specify four sets: alphabet, words, grammer, and semantic. We define these four sets informally as follows:

For building a compiler, we need to build a scanner and a parser. The parser will create the abstract syntax tree (intermediate representation). We then use AST to generate our target code.

goyacc is a version of Yacc for building parsers and syntax analyzers in Go. For building the scanner in Go, there is no equivalent of Lex. You have a few options. Depending on how complex is your language, you can create your own scanner/lexer using available packages such as text/scanner. There are also tools like Ragel for generating lexical analyzers in Go. Many times, using a tool for generating your lexer is overkill and generated lexers are not usually as fast as hand-written ones.

We first start by formally defining our language grammar (syntax) and creating a parser for it.

Here is our language grammer in in BNF (Backus normal form):

Our grammar has four rules.

This grammar is ambiguous in the sense that precedence of operators (, and ;) are not specified, and we don’t know if we should group operands of these operators from the right or the left (associativity). We show these ambiguities using an example:

To address these ambiguities, we give , and ; equal precedence and group them from left to right.

Here is our language grammar in Yacc (parser.y):

Whatever defined between %{ and %} will be inserted to the generated source code. In this case, we are specifying our package name and adding a helper function to create an abstract syntax tree.

Next, we define our tokens and types:

In our language, we have four types of tokens: OPEN, CLOSE, OP, and LABEL. Notice , and ; are defined as one token (OP). OPis tagged with <op> and LABEL is tagged with <label>. These tags are correspondent to union fields that we will see shortly.

We also have two types: formula and expr. Types are non-terminal (non-leaf) nodes in our abstract syntax tree. When types are present, type-checking is performed.

Then, we specify associativities and precedences for our grammar constructs:

In this case, our operators (, and ;) have equal precedence and they are left-associative.

Next, we specify the start symbol:

formula is a non-terminal and the root of our abstract syntax tree.

When our parser reads the stream of tokens: TODO:

We specify these values using a construct called union (In C/C++ the generated code will be a union and in Go it will be a struct).

node is the type for non-terminal nodes in our abstract syntax tree. Later, we define the node struct in our lexer as follows:

Each node is either a terminal (leaf) with value (val) or a non-terminal operator with left and right operands.

Finally, we define our language grammar in BNF after %%:

Upon evaluation of each rule (non-terminals), we need to return a node type. The node that has to be returned is defined between { and } after each rule.

$$ is the variable that we are supposed to set the result on it. op is a constant we define in our code. $1, $2, and $3 are the values for tokens and types in the right side of rule (values for expr, OP and expr respectively).

Since formula is marked as %start, when we see the formula --> OPEN expr CLOSE rule, we need to complete our AST. We do this by calling setResult function. yylex is the lexer we pass to the parser.

Now, we can generate the source code for our parser by running the following command:

Now, let’s take a look at the generated file (parser.go). The following function is what we are interested in:

This function receives an input parameter of type yyLexer which is an interface defined as:

Now, we know what methods our lexer should implement (Lex and Error). The parser will pass an input parameter of type *yySymType to Lex method. yySymType is a struct defined as:

You can notice that this struct is generated based on the union construct we defined in our parser.y.

Here is the source code for our lexer (lexer.go):

The code for lexer makes things more clear, but let’s go through a few important things.

The constants we used to return a node upon evaluation of a rule are defined here as:

The values of OP are defined as:

As we already see, node is defined as:

We are using the built-in text/scanner package for tokenizing and creating our lexer. A Scanner by default skips all white spaces and recognizes all identifiers as defined by the Go language specification. In our language, labels can have - between characters and digits. We need to change the default behavior of Scanner, so it can recognize our labels properly. We do this by defining a custom fucntion called IsIdentRune as follows:

Lex is called by yyParse() function and an input parameter of type *yySymType is passed to it every time (lval). yySymType is generated using our union definition. Using our scanner, we scan an identifier and then we figure out which type of token is that. If the token is an OP, we set a value (either orOp or andOp) for it to op field of lval (we tagged OP token with <op>). Likewise, if the token is a LABEL, we set its value to label field of lval (we tagged LABEL token with <label>).

The code is pretty straightforward. We traverse the abstract syntax tree recursively and construct the SQL query.

You need to first install goyacc. You can install it using go get command as follows:

Then you need to generate parser.go from parser.y as follows:

Now, you run the tests or import your compiler from this package.

Compilers are an integral part of our experience as developers. They translate a program written in one language into another. A programming language is defined by specifying four sets: alphabet, words, syntax, semantic.